Some movies exist for the sole purpose of freaking people out. Or just grossing them out. To achieve this, some studios spend a lot of time on creating truly creepy props. On this list are just some of the movie props that have given viewers more than a few chills over the years.

Warning: Some of these images are rather disturbing and not suitable for sensitive viewers.

The movie Midsommar was truly nothing to write home about, but the scenes with the old folks jumping off a cliff and suffering horrific injuries (including a face smash) are fairly disturbing. However, arguably the most horrifying part comes towards the end of the film when one of the male characters, Christian, is dressed up in a bear suit and burned alive.

The bear suit has recently been put on auction alongside a mallet also used in the film, to raise funds for charities that are helping communities and front-line workers during the Covid-19 crisis.[1]

While The Creeper is not going to go down as the scariest monster in movie history, he does some pretty disturbing things in the Jeepers Creepers films. Like chopping off a police officer’s head with a battle axe and making one of his throwing stars from the belly button of college student, Darry Jenner, after killing him. All the throwing stars he uses are made from the bones, flesh, teeth and fillings of his victims.[2] 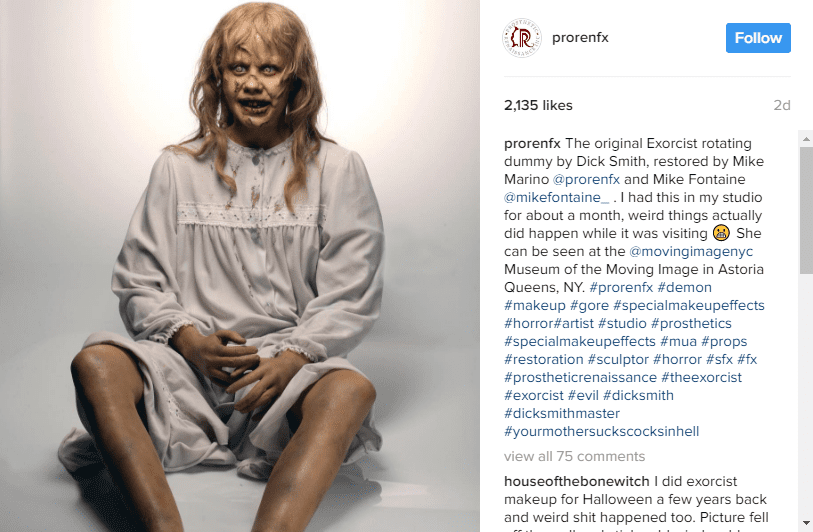 This might be the very last thing anyone would want to see in the dark of night inside their home. Or anywhere for that matter. The Exorcist film still holds up after all these years and this life-sized dummy is about as creepy as the Regan character itself. The dummy’s head is not only freaky-looking but can spin 180 degrees (as seen in one of the most memorable scenes in the movie), which in and of itself is rather unnerving.

The dummy now lives in The Museum of Moving Images, NYC.[3]

Total Recall is not a horror movie, or even scary, but the scenes with the mutant twin are pretty freaky. Considering that the first Total Recall movie was released in 1990, the special effects used for the mutant baby, Kuato, hold up pretty well. In the picture above the body suit with Kuato attached is ‘hung out to dry’ in between shooting.[4]

Wrong Turn is a gorefest from beginning to end, with a cannibalistic family violently taking out anyone who crosses their path. During the film, one of the characters finds a severed ear on the ground, another is hit by a speeding car and yet another has her face split in half by an axe. During a particularly gruesome scene it is revealed that the murderous family has a collection of body parts stored in jars. These include teeth, organs and appendages.[5]

5 Deformed baby – The Hills Have Eyes 2

While The Hills Have Eyes 2 wasn’t the best horror movie and scored a measly 12% on Rotten Tomatoes, the graphic scene in which a restrained woman gives birth and is then killed, is about as disturbing as they come. It gets worse when the baby is shown to resemble the movie’s cannibalistic mutant killers.[6]

The Collection is a psychological slasher movie responsible for one of the most unsettling scenes in any scary movie. The killer in the film is called The Collector and from just this one picture, it is clear why. The prop, named Stapled Wall Corpse, is up for sale and looks just as disturbing as it did in the movie.[7]

Hereditary features one of the most shocking decapitation scenes in movie history. As the scene progresses it is unclear whether the young girl, Charlie, who loses her head, is actually dead or not. It becomes crystal clear however when her head is shown lying in the middle of the road, covered in ants and flies.

It took some extremely detailed work to create the animatronic puppet that was used for the decapitation scene and the result is mind blowing and extremely creepy.[8]

The reverse bear trap is one of the most horrifying instruments of torture used in Saw. A victim’s head is locked inside the trap and secured with a padlock. In the first Saw movie, the trap had to be unlocked within 60 seconds or the trap would burst open and rip the victim’s face apart.

The reverse bear trap shown in this photo is a replica of the original prop.[9]

1 Human guitar – From Dusk till Dawn

The horror action flick, From Dusk till Dawn, stars Quentin Tarantino, George Clooney, Harvey Keitel, Juliette Lewis and Salma Hayek. The plot centres around a group of bank robber brothers who end up at a strip club in Mexico, where they realize that the bar employees are vampires. The movie is filled with weird and disturbing scenes, but one stands out above them all. At one point, a band member plays a guitar made from a human torso with the head still attached and one leg protruding from it.[10]

Estelle is a regular writer for Listverse.

Read More: Mary and Me